Hesquiaht children in care were welcomed to their ancestral home at Hesquiaht Harbour on Aug. 23.

During a visit to Hesquiaht Harbour this summer Chuck Lucas recalled a time years ago when he heard singing on the shoreline.

“I was sitting on the beach first thing in the morning,” said Lucas, who lives in Hot Springs Cove, of the singing. “Just real clear and strong.”

For Lucas, the experience was similar to others he’s had in the Hesquiaht First Nation’s traditional territory that entailed hearing the spirit of his ancestors. It’s a place that sparks childhood memories of berries, fish and outdoor walks – an environment that gives a sense of liberation to the community’s children.

“They liven up” said Lucas. “Their ancestors they can sense here.”

Cecil Sabbas also recalls early years in Hesquiaht Harbour, where his father lived while Sabbas spent most of his youth away in a residential school. During the First Nation’s week of camping at the traditional site in August he noticed reservations fall away from the young ones.

“It seems like they open up more, they become more willing to share,” Sabbas said. “We have 740 members in Hesquiaht and I’m willing to bet that 90 per cent of our young children have never, ever been in Hesquiaht…I makes me feel so good to see them here.”

These feelings were intensified when Lucas and Sabbas saw their young relatives in care visit the site on Aug. 23. Under the management of Usma, the Nuu-chah-nulth Tribal Council’s family and child services department, 10 children in care were brought in boats to Hesquiaht Harbour to reconnect with family, their community and the land. Lucas is the uncle of a child from this group, while Sabbas has two grandchildren in care.

This was the second summer in a row that a group of Hesquiaht children in care were brought to the territory. Last year they came for a day, but over the third week of August 2017 approximately half of the children in care spent a few days camping at the site with adults from their family, the Hesquiaht community, Usma and, in a few cases, foster parents.

Usma Director Kyra Mason said the initiative is about gradually fostering stronger connections with family to encourage future supports for the children in care. In some cases this can lead to children living with members of their extended family.

“You get to start that planning, that permanency planning of kids connecting with family, being able to build relationships, possibly even exploring other placement,” Mason said. “[There’s] always this desire from families and communities for children to return home. For that to happen, what’s happened in the other communities that we’ve done this with is that you need extended family.”

After the children in care arrived they were welcomed by Elder Betty Lucas and other Hesquiaht youngsters, who presented gifts to the visitors.

“I hope we give you precious memories, and we would like you to come back,” she said while presenting a headband weaved from cedar bark to a young girl.

“We’re hoping that someday we’ll quit these celebrations, that all our children will be back with our families,” said Chief Councillor Richard Lucas. “Our ancestors are smiling now because of all the people home.”

Reconnecting with its heritage is a multi-generational need for the Hesquiaht. The federal government moved the First Nation from its ancestral home in the 1960s after the community lost fishing boats each year in Hesquiaht Harbour’s shallow waters. Before the Hesquiaht’s relocation to Hot Springs Cove Richard Lucas recalls living at the site with his grandfather, Thomas Lucas, when there was over 100 residents. Now just one family of four remains.

“I remember being the age of these children here. The men did all the hunting, the younger men gathered all the wood off the beaches because there was no power saws in those days,” said Richard. “Grandmothers and mothers were cutting the seals up and us kids had to sit there with our moms. I still remember that very vividly.”

Moe Lucas is among the few Hesquiaht members who can understand his nation’s Nuu-chah-nulth dialect, but he admits a “bashfulness” when trying to speak the language. From the age of seven, Moe was prohibited from speaking his mother tongue while attending residential schools. Speaking Hesquiaht brought punishment while at the institutions.

“You really got it,” said the 71 year old. “They either put soap in your mouth or pepper. You’d have to swallow the pepper.”

It’s a history that can bring confusion from being caught between two vastly different worlds, admits Moe.

“You want to live in this world we live in now, and then trying to go back to the way it was is really difficult,” he said. “In a way we’re adult children because we’re still kind of feeling the effects of residential school. Welcoming these young kids, it’s quite a feeling. I’m still trying to understand a lot of things. Our own people are trying to understand them.”

As multiple generations within the First Nation strive to connect with their community’s heritage, Hesquiaht Harbour will remain a place for laughter, healing and regeneration.

“These Hesquiaht days are good for people to reconnect,” said Richard Lucas. “It is rough, but it’s our home so we like to come back and just reconnect with our ancestors and have good feelings, good spirits. We’ll feel it for a few months.” 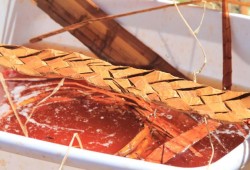 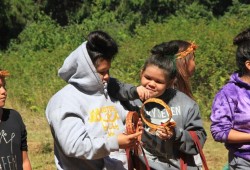