Matthew Jack embraces his daughter, Matty, while fishing close to their home in Kyuquot, on August 12, 2020. (Melissa Renwick photos)

During each of Elizabeth Jack’s pregnancies, her husband talked to his unborn daughters from inside her womb.

Whether the couple was out hunting or fishing, Matthew would speak to his wife’s stomach as if it could talk back.

It wasn’t anything poetic. He approached those conversations practically, explaining where they were, what they were fishing for and which lure he was using.

Now, when you ask his eldest daughter, Norah, how long she has been hunting for, the 11-year-old proudly replies, “ever since I was in my mom’s belly.”

Mathew’s father was a logger, which meant that he was often away working at camp. Largely raised by his grandmother and mother, he feels like one of the “lucky ones.”

Deeply rooted in their spiritual teachings, Matthew has always felt a strong connection to his Ka:'yu:'k't'h'/Che:k:tles7et'h' First Nations’ culture. While he aims to instil those values within his daughters, his lessons are primarily for survival.

“I’m trying to teach my girls that they can do anything,” he said. “Anything can happen – if I’m not there I want them to be prepared. Whether it be earthquakes or tsunamis, I want them to be able to take care of themselves and those around them.”

As a six-year-old boy, Matthew’s mother, Norah, used to paddle him out in a hand-made rowboat around Aktis Island. Carrying a .22-calibre rifle, Norah would aim at the flock of cormorants that predictably sat on the nearby rocks, oblivious that they would be served as the family’s next meal.

“We survived off the land when I was young,” said Matthew.

While many First Nations are focused on the loss of language, Matthew has concentrated on imparting his grandmother’s teachings on traditional food gathering.

“That’s a big part of our heritage,” he said. “Knowing all the foods you can harvest from the ocean or the land and knowing the connection with each one of them.”

As many youth forgo their traditional foods – like shellfish – in favour of pizza pockets, Matthew said his daughters crave the food they have reeled in from the ocean or shot out of the sky.

On their hunting trips, they say a prayer after the killing of each deer, “letting go and giving thanks for the life of that deer,” said Matthew.

There is sternness to his teachings. When his youngest, Bella, left a knife turned upright in the boat, he sharply told the nine-year-old to turn the blade down.

And yet, there is softness.

He has been teaching his three daughters, Norah, Bella and Matty, how to use a knife “since they learned to walk.”

When Bella cut her hand while learning to carve, he reassured her not to worry.

“That’s part of learning,” he gently told her. “You’ll get cut and hurt, but it happens – you’ll heal.’”

His pride as a father is unmistakeable.

As he recounted the story of Norah shooting a duck through its beak from a boat that was travelling 28 miles per hour, he beamed with a smile that spread cheek to cheek.

Elizabeth shares in his delight. “Proud,” is the word she uses when describing her children.

“Proud – because I never grew up that way,” she said. “I’m glad these guys are learning when they’re young. Hopefully they keep passing it on to their kids.”

While the land might not be as plentiful when the couple’s daughters have children of their own, there are certain teachings that will remain constant.

“When we’re on the boat, we have to know our surroundings,” said Bella. “We memorize the mountain tops so we can always find our way home.” 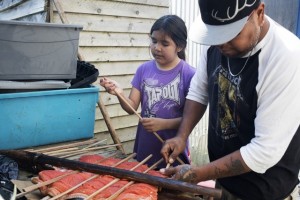 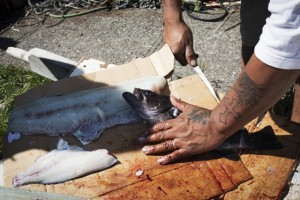 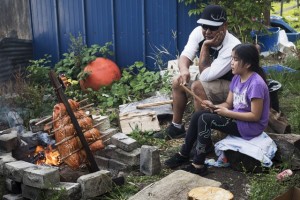 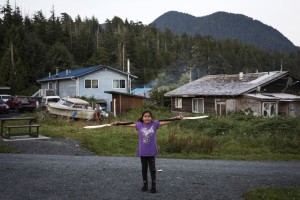 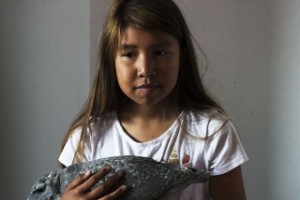 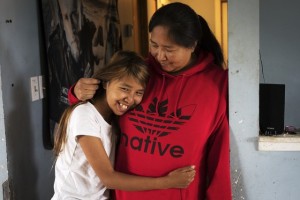 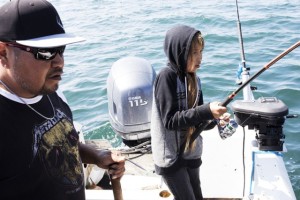 Matthew Jack guides his daughter, Norah, as she reels in a fish while fishing close to their home in Kyuquot.