Nuu-chah-nulth-aht celebrate the Justification Ruling outside the B.C. Supreme Court in Vancouver in 2018. (Eric Plummer photo)

After stalled negotiations with Fisheries and Oceans Canada, in August hereditary chiefs of five Nuu-chah-nulth nations authorized their people to harvest according to their First Nations’ own respective fishing plans, thereby disregarding allocations that were set by DFO. Do you support this? Who has the final authority over ocean resources off Vancouver Island’s west coast?

The relationship between DFO, First Nations and stakeholders needs to be built on trust and based on science. Our Conservative government will work with stakeholders, First Nations, and regional jurisdictions to implement ecosystem-based fisheries management, including control of abundant predator populations which impact commercial and SARA-listed species.

Due to Aboriginal Title being upheld in the Supreme Court of Canada, jurisdiction to lands and waters is at a checkmate here where many First Nations have not signed treaties and deals with the Canadian government.  It would be good if Governments of both nations sit together and determine what is best for present and future generations of both humans and marine life. The old teachings handed down are guides to going into the future.  The wild salmon, cod, shellfish and our oceans have given us so much, we must protect them, enhance them and care for them as they have cared for us through generations.  What we do to one, we do to ourselves. Everything is connected. I do support self reliance and conservation through the hereditary teachings.

The Constitution of Canada recognizes the right of Indigenous fishers to catch and sell fish within their territories. The courts have repeatedly re-affirmed this and directed the federal government to allow these nations to exercise these rights through a fair negotiation of their share of the fishery. Instead, successive Conservative and Liberal governments have fought First Nations in court and declined to negotiate in good faith, leading to this decision by the Ha’wiih, which I believe is a reasonable and just approach in the absence of Canada’s willingness to negotiate the shared management of ocean resources on the west coast.

Yes, I support this decision. The DFO needs an overhaul, and to work in cooperation and consultation with nations, not imposing ivory tower colonial modelling on lived-life experiences. Green Party values include Ecological Wisdom, Social Justice, Participatory Democracy and Sustainability. Who knows best how local things work? Local hereditary chiefs!!! The DFO and various other agencies are not independent authorities, but highly pressured bureaucrats in alliances with industries with a profit margin in mind. There is more to sustainability than Gross Domestic Product. (We think of GDP as Gross Depletion of the Planet) The DFO has supported open net fish farms for decades, when indigenous knowledge supported by scientific evidence has proven how deleterious these licenses were.

As readers know, the DFO has responsibility for safeguarding our waters and managing Canada’s fisheries and oceans.  This role is critical to ensure health and sustainable aquatic ecosystems through habitat protection, based on sound science.
Part of the DFO’s responsibility is to consult First Nations, stakeholders and Canadians on matters of interest and concern.  Consulting is important to good governance, sound policy development and decision-making.
While disappointed negotiations stalled, I believe the DFO’s overarching responsibility is necessary to bring interested parties, and competing interests, into a single path forward to protect this important natural resource for generations to come.

Yes, I do support this.
Over and over again, Canada has failed its First Nations, and I am no stranger to delay tactics and excuses by governments who do not want to do what is right because it’s inconvenient, too hard, or too expensive. These five Nuu-chah-nulth nations tried to do it the way they were “supposed to,” won, and still got nowhere. Right is right. Rights are rights. Let’s act like it.
Common sense, mutual respect, cooperation, and true stewardship over ocean resources – for the good of the ecosystem and people, not profit or private interest – must prevail.

Yes. If our west coast fisheries are managed correctly we can all continue to benefit from them for generations to come, but it has to be done together, with Aboriginal Rights and Title as a starting point for negotiations. The federal government continues to spend too much time and money fighting First Nations in court, and losing as they did this past spring. I know our fisheries critic and my neighbour MP Gord Johns raised this numerous times in the House and in committee. 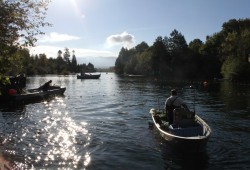