Tla-o-qui-aht First Nation members gathered in front of the nation’s main office near the Best Western Plus Tin Wis Resort in Tofino to protest recent housing evictions on March 31.

Nora Martin said she was evicted from her home in Ty-Histanis on March 30 after being asked to pay for arrears that her son hadn’t covered.

The arrears further accumulated during the COVID-19 pandemic after Martin said she was told by chief and council that she was eligible to defer her monthly rent for one year.

Now, Martin said she owes over $24,000 in arrears. While she tried negotiating with the nation to pay nearly double her monthly rent until the arrears were paid off, Martin said the nation’s administration denied her request.

“I have nowhere to go,” said the elder. “I've been floating around couch surfing.”

Over the past six years, the nation has accumulated $1.3 million in arrears from people not paying their rent, said Tla-o-qui-aht First Nation Tribal Administrator Jim Chisholm.

“Our chief and council have a monetary responsibility on behalf of all the people in the nation to manage their assets, which includes our housing,” he said. “Nobody in this world gets to live for free.”

Chisholm said the nation gives everyone an opportunity to negotiate a payback on arrears.

But, he said, Tla-o-qui-aht has to be “fair and equitable to everybody.”

Chisholm said he wasn’t at liberty to talk about Martin’s personal financial situation, but noted that “she does not meet the payback criteria that we need.”

Sheila Seitcher, Tla-o-qui-aht First Nation housing manager, said if a resident has not paid rent for three months, they get a first, second, and third warning before being served an eviction notice.

Even after being served an eviction notice, Chisholm said members have an opportunity to negotiate a repayment plan on their arrears.

“Everybody has been granted the same process to come in and sign a tenancy agreement,” said Seitcher. “[Unless] either somebody has refused to work with us or decided to seek legal [action].”

During COVID-19, Chisholm said the nation offered a three-month deferral on rent to those who needed it.

“It might have put some people in arrears,” he said. “It didn't cause somebody to get evicted. We don't evict somebody for being in arrears for three months.”

Martin’s sister, Grace, criticized the nation’s council members by saying they’re only willing to make an exception for some members.

“It’s favouritism,” Grace yelled to the council members who had gathered in front of the main office to listen to the protestors.

John Lucas Jr. was among the protestors looking for answers. The Tla-o-qui-aht man moved to Ty-Histanis with his mom and dad one year ago because their house in Optisaht was condemned. Despite only needing three bedrooms, they were moved into a four-bedroom house, he said.

His family wasn’t told they’d be responsible to cover the additional monthly cost of $180 to live in the larger house until a year after they moved in, Lucas added.

“Now [council is] trying to say we owe a whole year of rent,” he said. “They’re trying to get me and my parents into a different home … we're not getting evicted, but that's what it feels like. We've been in that house for a whole year and we’re comfortable.”

Councillor Joe Martin said he agreed with the protestors.

“I’m on the same side as you,” he said. “I understand the social issues that our people have. Some people just didn’t pay rent because of social issues. We have to work on those things. We have a lot of things that we are working on.”

Housing is one of the “ugliest” issues that council has to contend with, said Joe.

“We're all human beings and we don't want to see people on the street, but we also believe in equity and fairness,” he said. “We have over 100 families on our housing list … they want to come back here but they can't because there's no housing available. And we have people here that think it's their right not to pay rent. It doesn't work.”

A four-bedroom house within the nation’s communities rents for a maximum of $880, while a one-bedroom unit rents for $350, said Seitcher.

The nation held a community housing meeting two weeks ago, which they opened to the public.

Chisholm said the housing manager and financial manager were both in attendance to address the community’s concerns.

None of the members who gathered to protest attended, said Chisholm.

Grace said a two-hour meeting isn’t enough time to “deal with all of the issues that need to be dealt with.”

“[Council] is there to … speak on our behalf and advocate for us, but they're not doing that,” said Martin. 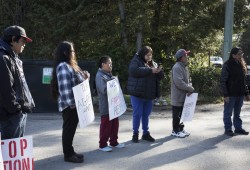 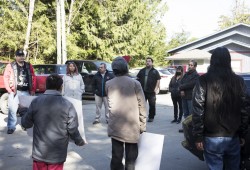 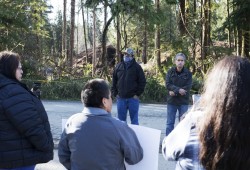