Sanford Williams stands at the door of his new carving shed in Yuquot at the southern shore of Nootka Island. (Eric Plummer photos)

When Sanford Williams returns to his home at the south edge of Nootka Island each summer, there is little time to waste. The carver has made a practice to starting work at 6 in the morning, usually finishing by 7 or 8 in the evening.

With more than 40 years of experience of crafting with the knife, Williams knows just what lies before him when he returns to Yuquot each June. The period usually lasts three months before he returns to his wife Marlana in Hope.

“As soon as I get out here I have a pole project,” said Williams, who strengthens his hands and forearms with dumbbells to sustain the long summer days of carving at the Nootka Sound summer home. “I normally start it right away in June so I can have it done by the time I leave.”

Next to him over a dozen hand tools are strategically laid, each one made by the artist to suit his personal preferences.

“It’s better if you make your own, then you know exactly what you’re getting,” said Williams.

As over 200 people converged in Yuquot to enjoy the Mowachaht/Muchalaht First Nation’s annual Summerfest celebration on Aug. 6, Williams worked in the relative quiet of his large carving shed on three poles for a fishing lodge in Mowachaht Bay. He estimates the project will take three years – encompassing nine months of carving time in his new workshop.

He works from drawings that specifically plan out the finished product.

“I normally draw and scale drawings of my design, what I’m going to put on the log first and I go by that, do all the measurements from the drawing,” explained Williams.

The place of his upbringing - an ancient village site where archaeological excavations show First Nations have lived for over 4,300 years – provides a drastic change of scenery than where Williams creates for the rest of the year.

“The view for one is a big difference for me,” he said, comparing Yuquot to Hope. “If I go over there I see mountains all the time. It feels kind of closed in there, here it’s open – plus I can feel our ancestors around here at one time.”

For years Williams worked feet from the shore in a carving shed just below the home of his parents, Ray and Terri Williams. A thick lawyer of cedar shavings collected on the floor, where the carver worked to the rhythm of the nearby waves.

But as the years went by the need for a larger, more stable shed that could accommodate bigger projects became apparent.

“The waves were starting to reach up in the wintertime against the windows,” said Williams, who now works in a nearly completed 20-by-32-foot structure right next to where his father Ray still lives year-round. “It feels more roomy, more brighter for me.”

Much of the construction took place over the summer last year, with major help from the Strathcona Lodge’s head carpenter and his crew. Williams gave them a carved paddle to express his gratitude.

“He was interested in doing it for free, but that was a lot of work for him,” he said of the carpenter’s help. “I really appreciate that, getting this shop up for me, so I did a carving for him, a nice paddle.”

Along the ceiling of the carving workshop lies a fir log Williams found on Yuquot’s beach, selected for its length and straightness. Measuring over 30 feet, Williams pulled the log up to the workshop location inch by inch with a hand-operated winch.

“I rounded it over with my chainsaw, skimmed across it, it took me about four days to clean it up, and a couple more days to pull it up the hill with a come along,” he said. 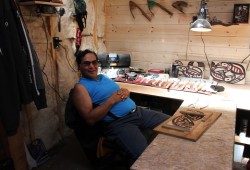 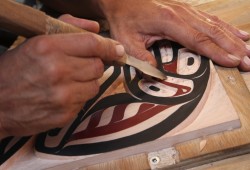