New funding for a bighouse was announced in Maaqtusiis Secondary on Flores Island, British Columbia, on August 10. The Ahousaht First Nation plans to use the federal funding to build a safe space for those threatened by sexual violence. (Melissa Renwick photos)

As community members from Ahousaht First Nation gathered inside the gymnasium at Maaqtusiis Secondary on Flores Island, deep roars of thunder penetrated the room.

“The ancestors are here in full force,” said Rebecca Atleo, Ahousaht Education Authority director of education. “It's very indicative of the excitement that we have for today.”

Addressing those gathered on August 10, Atleo revealed that the nation received $8.3 million towards the construction of a new bighouse through the federal government’s Cultural Spaces in Indigenous Communities Program.

Upon hearing the news, the room erupted into applause and cheer.

The bighouse is being designed to provide a space for young girls, women and 2SLGBTQQIA+ people in Ahousaht to be emotionally and physically safe.

Launched by Crown-Indigenous Relations and Northern Affairs Canada, the contribution program is aimed to support Indigenous communities in re-establishing and revitalizing cultural spaces.

Kate Drexler is the instructional principal at the Maaqtusiis schools. Over the five years she’s been working within the community, Drexler said she’s seen how the prevalence of sexual violence has impacted students at the schools.

“We’re trying to say that as a community, we’re not ok with what’s happening,” Drexler said.

In only nine days, Drexler, Atleo and Sarah Reid, a Maaqutusiis Hahoulthee Stewardship Society consulting advisor, worked to put the grant proposal together. It was done with the support from community members, Ahousaht’s Ha’wiih (hereditary chiefs), as well as chief and council.

“Bringing our community together to plan and construct a bighouse is an opportunity in itself for healing,” the proposal read. “The bighouse is not only a symbol of culture, but also of strength, collaboration and unity. Having a physical space for our Ha’wiih to govern, and for our muschim (people) to come together to unlearn colonial ways and re-learn traditional ways of doing.”

It will be built in consultation with community members, who will help decide the location, Atleo said.

Tom Paul is a drug and alcohol councillor with Chah Chum Hii Yup Tiic Mis who has been advocating to bring awareness around sexual violence within his community for years.

“Ahousaht is not a safe place for women and children,” he said.

Prior to contact, Paul said women were placed on the “highest pedestal.”

Sacred rituals and ceremonies that were once held in honour of women are now only talked about, Paul said.

“There’s so much shame and so much pain from intergenerational trauma,” Paul said. “It’s got to stop. No more sexual abuse – no more.”

Sexual violence is a learned behaviour that stems from the traumas of colonization and residential schools, Paul said.

After being victimized by sexual abuse in residential schools, Paul said it started a cycle of people victimizing each other.

Since the application for the bighouse was submitted in December, Paul said two of his granddaughters were sexually violated by being touched inappropriately.

In order to heal, Paul said “we need to walk through the fire together.”

“We need to talk about it so our grandchildren and future grandchildren don't go through this vicious cycle,” he said. “It's still happening and it boils down to the fact that we don’t respect women.”

The bighouse will not only be a safe space for young girls, women and 2SLGBTQQIA+ people, Tom said it will also be a place where “we can start teaching ourselves as men how to treat women.”

Healing ceremonies, coming-of-age ceremonies, marriages, memorials and seating-of-the-chief ceremonies will all be practiced inside the bighouse.

“Through these rites of passages, we will be reminded that hišukniš ćawaak, ‘we are all one,’ regardless of age, creed, race or gender,” the bighouse proposal read. “It is through these practices that Ahousaht people of all genders will restore, reclaim and revitalize their identities.”

Drexler and Reid were honoured with traditional names for the work they put into the project.

Mamu-aqtl, which means “hard worker,” was given to Drexler, and Reid was named thlaayik, which translates to “always giving.”

The gesture moved Drexler to tears.

“Culture is healing,” she said. “Having a space where culture can be practiced and celebrated is a pathway to healing.”

Ahousaht council member Hohomyiis (Walter Thomas) said the bighouse will be a place where members can show and share language, songs, dances and prayers.

“It helps give our kids identity,” he said.

If members start feeling safe in the bighouse, Atleo said it’s a feeling that will start to “emanate” throughout the community.

“Once we start holding people accountable for their actions, I really believe that things are going to change," Atleo said. “It’s been a long time coming.” 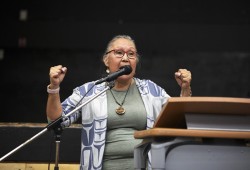 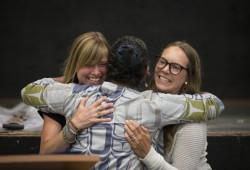 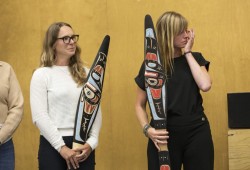