Where is Lisa Marie?: The family continues to ask a decade later

Grandfather Moses Martin sings a prayer song at Christ Church where supporters gathered after a walk to honor the memory of missing granddaughter Lisa Marie Young.

Moses Martin, chief councillor of Tla-o-qui-aht First Nation and the grandpa of missing Lisa Marie Young, now 10 years gone without a trace, said he felt conflicted while traveling from Tofino to the annual walk held to keep his granddaughter’s memory alive.

On June 23 at Christ Church in Nanaimo, Martin was preparing to sing a prayer song when he shared with the gathering that he had been praying that day for Lisa Marie’s remains to be discovered.

That’s until he drove past a site where the family scoured the landscape for the missing girl all those years ago. Then, all of a sudden, he was praying that her remains would not be found.

Such is the faint hope that flickers inside the family’s heart. Their minds are resigned to knowing that Lisa Marie has passed, taken through violence at the hands of a stranger. But because there is no body, no person to account for Lisa Marie’s last hours, there is an inexplicable optimism that taunts them with the shreds of a possibility; “Maybe,” as Martin said.

What the family does know is that Lisa Marie Young, at age 21, went to a downtown Nanaimo night club with friends on the evening of June 29, 2002. At closing time, with a man they had just met, Lisa and her friends traveled to a party in an older model red Jaguar. They then, together, moved to another party.

At the second house party in the Cathers Lake area of Nanaimo, Lisa said she was hungry and was offered a ride to a sandwich shop by the driver of the Jaguar. She accepted his offer and left alone with him. Lisa’s last communication came at 4:30 a.m., June 30, when she texted a friend expressing concern about the driver and her situation. The driver has been questioned by police.

Lisa Marie’s family walks each year to remind people that they are still looking for answers.

“Somebody knows something,” said relative Rose Fred. “Someone, sometime has to come forward.”

Kendall Hanson, a reporter with CHEK News, walked with the family along Bowen Road carrying an oversized photo of Lisa Marie. He had reported on Lisa Marie’s disappearance from the beginning, and says it’s a story that has bothered him since because there is no resolution.

“There are people out there with a really heavy conscience; people have things weighing on their minds,” he told Ha-Shilth-Sa.

Hanson said the walk, called “A Voice For Lisa Marie,” is an opportunity to remind them that the family and community want some answers.

After the walk, about 60 supporters gathered inside the church decorated with purple and white balloons and butterflies adorning containers filled with candles. The large photo of Lisa Marie was propped against the pulpit which stood beside a framed pencil sketch of the girl.

Grandpa Martin lifted his drum to begin his prayer song, but said instead that 10 years have done nothing to make Lisa Marie’s disappearance any easier to bear.

“The pain is still there.”

“We live in a violent world,” he said. “Take the time to talk to your children.” Know where they are and tell them you love them, he suggested.

Pastor Chelsey Harmon told the gathering that Lisa Marie’s mother Joanne Young had found some measure of peace through the church. She said Joanne wants people to hope, not only for some resolution for Lisa Marie, but for others like Lisa Marie and their families.

Lesley Clarke, executive director of Nanaimo’s Women’s Resources Society, said she has seen the pain in a mother’s eyes who does not know where her child is. She said she has been so moved by Joanne’s spirit and love.

“I wish I could give you the gift of knowing,” she told her.

Grandmother Cecilia Arnett, who remained close to her daughter Joanne throughout the day, told the gathering through tears that it had been 10 years of suffering, wondering what happened to her granddaughter, wishing she was here.

With tears streaming down her face she said “not a day goes by that I don’t think about her.”

When the sharing was done, participants were invited to light a candle in memory of Lisa Marie while a pianist played “Be My Everything” gently in the background. Afterward, the participants held hands in a circle to offer their private prayers. 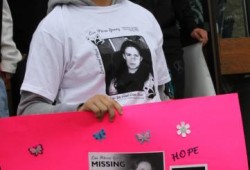 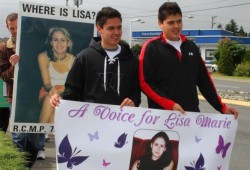 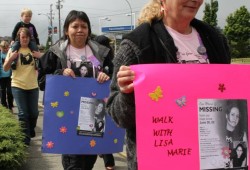 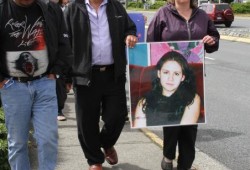 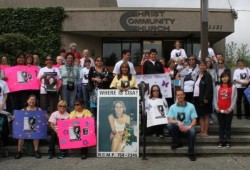 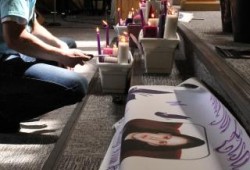 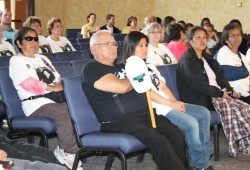 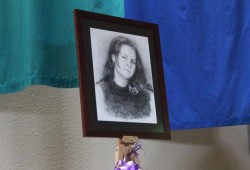 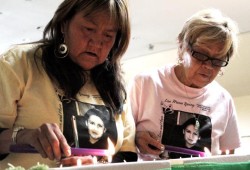 Ahousaht war veteran remembered for his legacy as a knowledge keeper