This summer Mowachaht/Muchalaht fishers caught 2,777 chinook on the Conuma River, an encouraging harvest from meagre returns in the area during recent years. (Ha’oom Fisheries Society photos)

Officials with the Ha’oom Fisheries Society are encouraged by the fishing exploits of Mowachaht/Muchahaht First Nation members this year.

The Tofino-based group works with five Nuu-chah-nulth First Nations to support and facilitate their involvement with various fisheries.

In recent years, MMFN members had limited participation with the Conuma River fishery, which opened on July 12 and closed on Sept. 13 this year. During this two-month period, MMFN members reached their allocation of catching 2,777 pieces of chinook in the Conuma River. Reaching the capacity limit this year enabled them to surpass their previous five-year average by almost a whopping 2,500 per cent.

Kadin Snook, the fisheries coordinator for the Ha’oom Fisheries Society, said one of the reasons for the MMFN fishing successes this year was because of the locations where members were fishing – they were allowed to fish close to home.

“Muchalat Inlet is geographically closer to the nation,” Snook said. “It’s a much more desirable spot.”

Having the proper knowledge of where to fish can take some time.

“They’re fishing in the right place at the right time,” Snook said.

But that’s not the only factor that contributed to the MMFN fishing successes in 2020.

“Fish behavior probably plays a role in it as well,” Snook said, adding fish are residing in shallow areas, making it easier for fishermen to catch them.

No doubt MMFN fishermen also benefitted from the fact they are now using newer and more efficient technologies, making it easier to locate and catch fish.

While pleased MMFN fishermen were able to achieve their full allocation this year, Snook said they are still dealing with very limited restrictions.

“It could improve significantly,” he said. “It’s definitely a far cry from the allocation I’d like to see.”

Besides the MMFN, the Ha’oom Fisheries Society also works with the Ahousaht, Ehattesaht, Hesquiaht and Tla-o-qui-aht First Nations.

Even though MMFN members were rather fortunate with their fishing exploits this season, Snook said the Ha’oom Fisheries Society will continue to seek increases in allocation and fight for greater capacity funding so that all five of its participating Nuu-chah-nulth First Nations can improve their fishing capabilities.

Snook said the efforts of MMFN fishermen this year are proof the society is on the right track with its capacity rebuilding. The fact more MMFN members and boats were out on the waters this year is also indicative of the fact capacity building is working. During a peak this year, 15 boats from the MMFN were out on the water, employing 21 people who were fishing.

Also noteworthy is the fact many of those who were fishing were bringing their children out onto the boats with them, passing on plenty of fishing advice and cultural information.

Snook was pleased to see a large number of MMFN members sharing the traditional Indigenous practice of fishing with their children.

“The biggest part of Indigenous fishing culture is sharing it and bringing it to new generations,” Snook said. “You are expecting fishermen for generations and generations which aligns with the values of the Nuu-chah-nulth.” 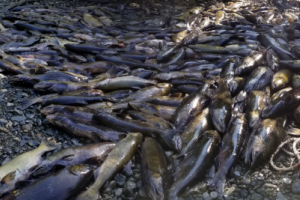