Andrea Inness of the Ancient Forest Alliance crowches atop a Douglas fir that was cut down this month in the Nahmint Valley. (Eric Plummer photos)

Some of the largest trees in Canada are being cut west of Port Alberni as part of old-growth logging currently underway in the Nahmint Valley.

Recent harvesting includes a massive western Douglas fir that was cut down earlier in May. This tree measured 31 feet in circumference and 10 feet wide, dimensions that would rank it among the country’s top 10 largest Douglas firs in the BC Big Tree registry, a public record managed by the University of British Columbia.

This discovery was reported to the Ancient Forest Alliance, an organization that works to protect old-growth forests and promote sustainable second-growth forestry practices.

AFA Executive Directorr Ken Wu said that an estimated one per cent of Vancouver Island’s old-growth Douglas fir trees are still standing, and compared the forestry practices in Nahmint to hunting endangered animals.

“It’s sort of like coming across a herd of elephants and slaughtering them all, they’re so rare these days, these monumental stands,” he said.

The AFA has identified two trees in the valley with dimensions that rank them among the largest of their species in Canada. These include the three-metre-wide Douplas fir that was recently cut down and what the AFA is calling “the Alberni Giant,” a Douglas fir growing deep in the Nahmint forest with a diameter of 3.7 metres (12 feet). They also found a 4.3-metre-wide (14-foot) western red cedar standing in Nahmint.

Some of these trees are thicker than those found in Cathedral Grove, which are provincially protected from harvesting. The grove’s largest tree is an 800-year-old Douglas fir measuring 2.8 metres in diameter, bringing the possibility that the Alberni Giant could be as old as 1,000 years.

“They are vitally important for endangered species and wildlife that need old-growth forest,” said Wu of the giant trees. “They provide clean water for steelhead and salmon in the Nahmint River, they store more carbon per hectare than any other type of forest on earth.”

The Nahmint trees are in 300-hectares of cutblocks that were auctioned for harvest by BC Timber Sales, a provincial agency that manages Crown land for the forestry industry. Nahmint’s largest old-growth fir trees each bring tens of thousands of dollars in marketable wood, according to information provided by the forestry contractor currently working on the cutblocks.

According to the province’s Vancouver Island Land Use Plan, the Nahmint Valley is not an area that should be seeing intensified old-growth logging. The valley falls under the Special Management category, which prioritizes “environmental, recreational and cultural/heritage values.”

“In the Nahmint landscape unit, there are 2,760 hectares of old growth management areas, ungulate winter ranges and wildlife habitat areas that protect old-growth forests,” said the Ministry of Forests, Lands, Natural Resource Operations and Rural Development in an email to the Ha-Shilth-Sa. “In addition, BCTS conducted a cedar assessment and specifically identified old growth cedar trees to retain from logging.”

The ministry emphasized that there are 520,000 hectares of Vancouver Island’s old-growth forests that will never be logged, comprising 55 per cent of the Island’s old growth forest that lies on Crown land.

But TJ Watt of the AFA believes that Nahmint’s largest trees are being targeted for logging. He said that the cutblocks designated for harvesting are the same parts of the Nahmint Valley that hold the largest old-growth trees.

“We looking to protect the same areas that the logging industry is looking to take,” said Watt.  “It’s happening all over the Island, all of the time. Old-growth logging is not a thing of the past, it just often happens in areas that are mostly out of sight and out of mind.”

The Nahmint Valley is in the Hah=uu>i of the Hupacasath and Tseshaht First Nations. The old-growth harvesting has sparked concern from some in these First Nations, including Brenda Sayers, a Hupacasath member who has taken family members to Nahmint in the past.

“I travelled out there quite often when I first moved home. I brought my nieces and nephews to get them acquainted with different parts of our traditional territory,” she said. “I haven’t been out there in a while actually, because it breaks my heart. I don’t know that I could handle seeing the state of the way things are.”

Sayers believes the practice goes against a pledge the NDP government made during the last provincial election.

“In partnership with First Nations and communities, we will modernize land-use planning to effectively and sustainably manage B.C.’s ecosystems, rivers, lakes, watersheds, forests and old growth, while accounting for cumulative effects,” stated the NDP platform in 2017. “We will take an evidence-based scientific approach and use the ecosystem-based management of the Great Bear Rainforest as a model.”

“The province has once again failed our Indigenous people,” said Sayers. “Some people think reconciliation means renaming a street or having cross-cultural workshops to minimise racism. To me, reconciliation is the land, and the government needs to recognize First Nations as the original right holders to the land.”

Minister of Forests Doug Donaldson responded to say that working with First Nations is the first thing the province plans to do as it revises its forestry management.

In a document dated Sept. 11, 2017, BC Timber Sales listed best management practices for “legacy trees,” which are exceptionally old and unique stands in the province’s forests.

“BC Timber sales recognizes that legacy trees are often attributed with having important cultural, aesthetic and ecological value,” stated the document. “These trees, when retained, can play an important role in habitat conservation by bridging old-growth characteristics into second-growth stands. In addition, large trees are increasingly supporting the growing ecotourism economy as valuable destinations in and of themselves.”

The BCTS guidelines for the protection of legacy trees cite a minimum diameter of three metres for western red cedars and 2.1 metres for Douglas fir, well under the width of the largest old-growth trees identified by the Ancient Forest Alliance in the Nahmint Valley.

But the BCTS document noted that all legacy trees might not be protected.

“Legacy trees may need to be felled during or after primary harvesting operations if they constitute a safety hazard (or are affected by other operational factors) that cannot be addressed through pother means,” stated the document.

These other operational factors could include “impacts to cutblock design, in particular in cutblocks that rely on overhead cable harvest systems,” “known First Nations interest,” and the “local abundance of legacy trees,” according to the BCTS document.

Wu believes that what’s going on in the Nahmint Valley shows that these guidelines are not serving their conservationist purpose.

“It has enough loopholes to drive a logging truck through,” he said.

Sayers noted that logging Nahmint’s old-growth trees threatens a “sensitive and valuable ecosystem” that provides protection for elk and deer during the winter.

“I think it’s really a crime against nature,” she said. “Every tree is an individual ecosystem. We believe that they have a spirit and as old as they are, they’ve witnessed to the things that took place in our traditional territory. They have a history, they hold knowledge and they’re sacred to us.”

“I feel bad for the loggers whose job it is to mow these trees down, because they have to live with that,” added Sayers. “They’re removing something that’s been gifted to us, they’re removing that right for their children and grandchildren and future generations.” 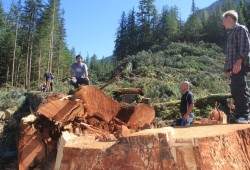 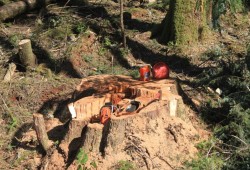 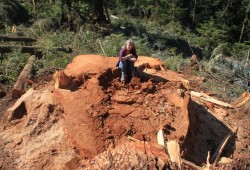 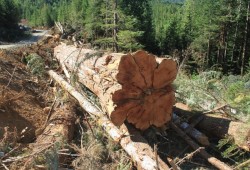 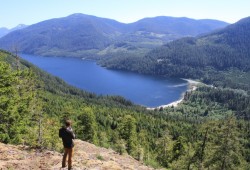 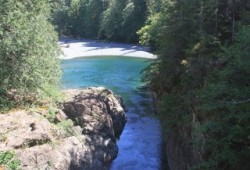 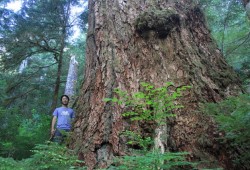